7 Best Handbrake Alternatives for Windows and Mac in 2023

What are some of the best Handbrake alternatives?

As an open-source transcoder, Handbrake helped many tech-savvy people to convert videos, digitize home DVDs, and apply basic edits such as cropping or de-interlacing. Being the FFmpeg-based GUI tool, it readily taps on the x264 and x265 encoders to deliver MP4, M4V, MKV videos, and remains popular among geeks and Reddit frequenters.

Still, it's never too much to prepare yourself with Handbrake alternatives for Windows and Mac computers. After all, there are times when Handbrake will fail your tasks, or perform slower than expected.

Handbrake may fail you on these aspects:

Don't get me wrong. When Handbrake works, it is nice piece of free transcoding software for DVDs and videos. But when it is acting up or you need additional features, the following alternatives to Handbrake can make your digital life easier.

No matter whether you want to replace Handbrake outright, or prepare an alternative to Handbrake in case of specific situations, VideoProc Converter is the overall best choice. As a professional video processing tool, it allows you to copy DVDs, convert, transcode, remux, compress, and edit videos.

Handbrake says you need to install missing frameworks for .NET to run the application? Besides messing around with .NET installer of various versions, you can also use the Handbrake alternative – VideoProc Converter, with more features – and fix the error once and for all. 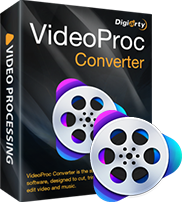 Handbrake only supports MKV, MP4, M4V, WebM output. If you also want to convert videos to AVI, ASF, MOV, FLV, SWF, DivX, M3U8, MPEG, video to audio, audio to audio and 420+ formats, VideoProc Converter as the best Handbrake alternative offers these formats out of the box.

Handbrake requires additional libraries to be installed to rip commercial DVDs. Plus, it cannot digitize 99-title discs or fails to rip the full disc titles. With VideoProc Converter, you can easily remove DVD region restrictions and unlock purchased DVD movies, aasily in 3 steps without errors:

If you are looking for a Handbrake alternative to compress video, there are several ways available using VideoProc Converter:

XMedia Recode is a donation-based freeware to transcode media. It also supports converting DVD and blu-ray to MP4, MKV, MEPG-1, MPEG-2, MPEG-4 and dozens of other digital formats. Given the rich feature set, it is safe to say XMedia Recode can be used as a Handbrake alternative for Windows 10 and older versions.

For DVD conversion, just like Handbrake, XMedia Recode allows you to create chapters, or auto-detect chapters in DVD/Blu-ray. Audio extraction from DVD, blu-ray, and digital video formats is supported, also.

For video transcoding, there are a bunch of predefined profiles for devices such as mobile phones, Sony consoles, Wii, Samsung and Xbox. Conversion among videos and audio are supported, and you can add up to 32 subtitle tracks inside this Handbrake alternative.

3. VidCoder (HandBrake Alternative for Windows Only)

As stated on the VidCoder official page, this open-source application is Handbrake-powered. Now that VideCoder uses Handbrake as its encoding engine, what's the point of using VidCoder as a Handbrake alternative? UI design and the target file size option are popular reasons.

VideCoder comes with a more modern design that helps users to navigate easily, though UI can be an entirely personal preference. The target file size option is another advantage over Handbrake – it allows you to encode video to a specified file size, with bit rate calculator that shows values when changing parameters.

VideCoder uses CRF quality control just like Handbrake. If quality control matters the most in your case, you can check the demonstration here to compare image quality when the CRF is set to 18, 20, and 25.

You can use VidCoder to rip DVD/Blu-ray and transcode videos to another formats, the output containers are limited to MP4 and MKV. Another handy feature is its ability to create preview segments out of the video, so that you can test and tweak settings before you start the whole conversion.

If you love the conversion feature in Handbrake, but somehow feel its editing feature falls short for your workflow, then Shutter Encoder can be a good alternative to Handbrake for Windows and Mac. This free video converter is programmed by video editors who know the pains and needs in that regard, without leaving behind features to burn and rip DVDs and blu-ray discs.

Shutter Encoder can help you to cut without re-encoding, switch video formats, extract audios, insert videos in between, and conform video for further editing.

Besides converting audio to WAV, AC3, OPUS, OGG, Dolby Digital Plus, it also supports turning video into intermediate format such as ProRes, DNxHD, CineForm for editing.

If you are using Handbrake mainly for MKV making, such as turn DVD to MKV while preserving chapters and subtitles, then MKVToolNix can be used as a nice replacement for Handbrake.

MKVToolNix is a free open-source software to create MKV files, with handy features to check metadata, extract audio and so on. In fact, it comprises a set of tools to facilitate your workflow. There are header editor, chapter editor, multiplexer to convert video streams, audio streams, and subtitles into one MKV, and tools for batch tasks.

Any Video Converter has both a free and paid version ($49.95). If you are looking for a free Handbrake alternative, the AVC free version has some features that resemble Handbrake.

If you are looking for a Handbrake free alternative, mainly for DVD converting features, then the free version of Any Video Converter is not suitable in this regard. It doesn't support converting DVD, nor does it support creating ISO, DVD folders.

Is Any Video Converter Safe?

Please note that Any Video Converter comes as a bundleware, with a security tool named ByteFence packed in the installer. If you would rather go with a clean install, make sure to check custom installation to uncheck ByteFence installation.

Avidemux is just another popular Handbrake alternative for Windows and Mac devices, as it is free. This tool is a combo of free video converter and video editor, with basic features to handle your media files. Having been around for nearly two decades, Avidemux has a quite outdated interface. Despite that, it is quite handy to make quick edits such as trimming videos. You can also find processing tools such as deinterlacing and noise reduction under filters from the menu.

If you are not satisfied with one or more aspects of Handbrake, you can use the best handbrake alternatives recommended above to make your life easier.

For tech-savvy persons, open source tools such as XMedia Recode and VidCoder are nice choices, provided that you are familiar with video transcoding and remuxing jargons. For users trying multiplex digital video streams to DVDs, MKVToolNix is a nice choice. Please download the installer of these open-source tools from their developer's site to avoid bundleware or virus.

For general users, if you want an easier solution, with modern interface and faster processing speed, VideoProc Converter is the overall best choice. It does everything that Handbrake has, and at the same time offers better solution to rip DVD, convert, transcode, remux video and audio, and packs more tools to tackle every details.

Cecilia Hwung is the marketing manager of Digiarty Software and the editor-in-chief of the VideoProc team. She pursues common progress with her team and expects to share creative content and useful information with readers. She has a strong interest in copywriting and rich experience in editing tips.